Here you can read more about how we handle matters and service due to Corona pandemic. Due to Covid-19
Submenu
You are here

Five million customers who spend thousands of hours in front of the computer. Paradox Interactive produces computer games for a demanding public. The company has grown by 45 percent every year since 2008 and reported a profit of NOK 240 million in 2015. “Largely thanks to our intangible assets which we protected via PRV – and the players who are codevelopers,” says founder Fredrik Wester.

Most of us have played a computer game at some time. However, it has become a lifestyle for a certain group amongst the population, and users form a community which discusses, plays and evaluates games. “It is the gaming community which helps us to develop our programs,” says Fredrik Wester, CEO and founder of the Swedish games publisher Paradox Interactive.

Most of us have played a computer game at some time. However, it has become a lifestyle for a certain group amongst the population, and users form a community which discusses, plays and evaluates games. “It is the gaming community which helps us to develop our programs,” says Fredrik Wester, CEO and founder of the Swedish games publisher Paradox Interactive.

Protecting your valuable trademarks is vital 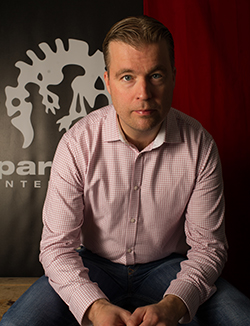 Having well-protected trademarks and the right to use them accounts for the biggest value in the computer games industry,” says Fredrik. Our trademarks are registered with PRV, the Swedish Intellectual Property Office.

PRV’s basic fee for a trademark registration is SEK 1,800, an investment which gives a registration certificate, which could be a prerequisite for success in a legal case concerning infringement. The trademark is an asset and should be considered as one too, which means it must be protected. The product can be as good as you like, but if it is associated with badwill, customers will go elsewhere. Establishment creates goodwill and gives you an edge over your competitors.

A trademark is a symbol or mark for a product or service. It can consist of words, figures, letters/digits, personal names, slogans or sound. It can also be a specific formulation of the product itself or its packaging. Regardless of which symbol you opt for, it must still be reproducible graphically.

Fredrik Wester explains that Paradox Interactive particularly protects its creative expressions with art and experiences in its games. “For us, it is important to protect our programs so that we can continually build and develop them, always in interaction with our customers. New apps are often released which attempt to steal our ideas and the work we have put in by offering exactly the same game on a different platform. We think this is unacceptable.

To protect its copyrights and prevent infringements of its trademarks, Paradox Interactive employs two lawyers and a paralegal. It is common for gamers to help develop the game by creating minor modifications - but the company will act as soon as anyone starts being paid for them. “It is common for there to be misunderstandings behind such events; the creator thinks he or she is adding value for us when actually the opposite applies. We normally pursue a dialogue and resolve the problem that way.

Wants exclusive rights to their risks

Strong protection is the key to building a long-term business, believes Fredrik. Paradox Interactive wants exclusive rights to the risks they have taken, particularly at a financial level. “We put a lot of effort into developing the very best games. If we develop five new programs, for example, two of them might turn out to be good. We are prepared to write off a SEK 15 million project if we are not absolutely satisfied with the outcome. People have high expectations of us and we continue to give them want they want and expect. In order to continue experimenting, we must ensure that we have exclusive rights to our products, something we can achieve by protecting them via PRV.

Paradox Interactive ended last year with a turnover of SEK 604 million and a profit of NOK 241 million before tax. The company has grown by 45 percent every year since 2008, which Fredrik believes is the result of good products, a carefully thought-out intellectual product rights strategy - and a good lawyer.

Learn more about trademarks and other intellectual property rights at the PRV School online.